Our doctors utilize the online Veterinary Information Network (VIN) to link themselves to specialists around the country. 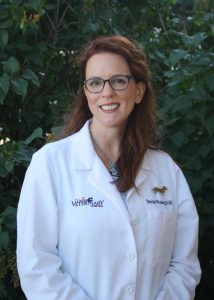 Dr. Winning graduated from Colorado State University in 1997. She practiced in Montana for over six years before coming back to her home state of North Dakota in 2003. She joined Valley Veterinary Hospital in 2006 and became a partner in the clinic later that year. Since then she continues to enjoy practicing small animal and exotic medicine, performing surgery and is certified in veterinary acupuncture at Valley Veterinary Hospital. As time has progressed, Dr. Winning has established many cherished relationships with clients and their pets and enjoys “catching up” with them on their visits.

Dr. Winning’s family includes two standard Dachshunds, Doobie and Dahlia. Dr. Winning is considered starting a support group for those, like her, who are Dachshund addicts. Other than spending time with her dogs, she enjoys cooking, gardening, running, and just spending time in the country. 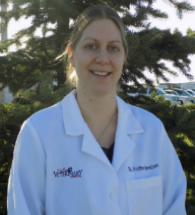 Dr. Haroldson was raised on a farm outside of Tappen, ND. She graduated from NDSU in 2007 and worked as a veterinary assistant in Bismarck until 2011. She then attended Kansas State College of Veterinary Medicine, where she earned her Doctor of Veterinary Medicine in 2015. Dr. Haroldson had been practicing at a mixed animal practice in ND after graduation until she joined Valley Vet in July 2016. She enjoys working with all species but has a special interest in exotic and zoo animals. Dr. Haroldson, her husband Chris and her son TJ share their home in Fargo with their yellow lab, 3 cats and a crested gecko. In her free time, Dr. Haroldson enjoys playing with baby TJ, reading mystery novels, spending time at the lake with family and walking or playing fetch with Daisy. 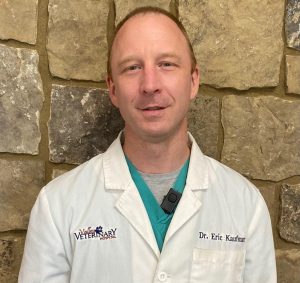 Dr. Kaufman grew up in Casselton, ND. He attended NDSU with a focus on biochemistry, biophysics and microbiology. He attended veterinary school at Iowa State University and graduated in 2004. After graduation he practiced in central Minnesota, later moving to northern Minnesota. In 2012 he moved back to Fargo where he performed veterinary relief services for local clinics. He began working as an emergency veterinarian in Fargo in 2013 before coming to Valley Veterinary Hospital in 2018. Emergent/critical care, ophthalmology, anaphylaxis and soft tissue/orthopedic surgery are his special interests. He specializes in cuddling kittens and puppies.

Dr. Kaufman enjoys time with his family, recreational/competitive cycling, triathlon, books and video gaming. His wife, Arelle, is an avid crafter and fitness coach. His son, Archer, is a pirate and his daughter, Emberleigh, is a general contractor and ballerina. His family rents a home from 3 cats (Zephyr, Powder and Sunna) and 1 dog (Ecco). 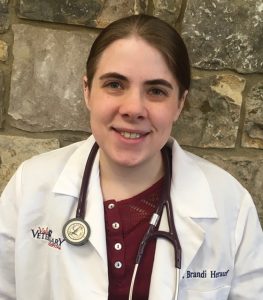 Dr. Herauf was born and raised in Dickinson, ND. She earned a biology degree from Dickinson State University, then went on to attend vet school at Oregon State University. She is interested in dentistry and surgery. In her spare time, Dr. Herauf enjoys spending time with her cats (Elsie and Luma), gardening, baking and sewing. 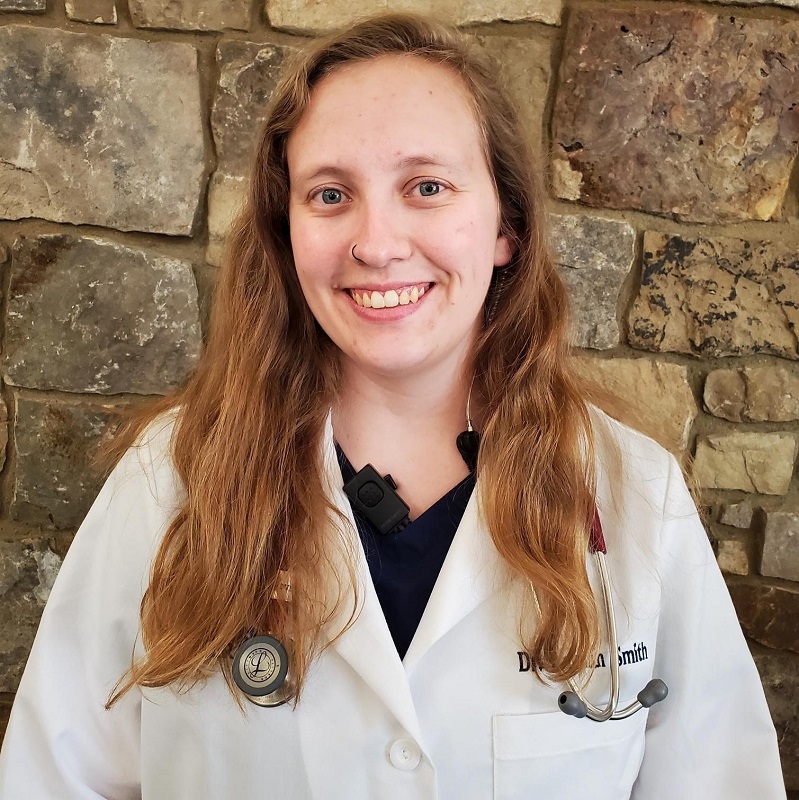 Dr. Smith grew up in the suburbs of the Dallas-Fort Worth metroplex in Texas. She graduated from Texas A&M University in 2016 with a degree in Animal Science before moving to Iowa to attend vet school at Iowa State University. After her graduation in 2021, she moved to Fargo to join the Valley Veterinary Hospital team. She enjoys all aspects of veterinary medicine, but is particularly interested in behavior. Dr. Smith and her chocolate Lab, Otis, are currently allowed to cohabitate with the feline “frienemies” known as Toby and Pip. If she is not taking long walks with Otis in her free time, she can usually be found cuddling with her furry boys, reading, spending time with friends and family, or (cats permitting) learning to knit warm wool socks. 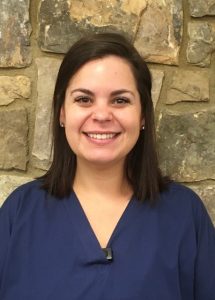 Haylee is from Rosemount, MN and moved to Fargo to attend NDSU in 2004. After graduating NDSU in 2008 with degrees in Animal Science and Equine Science she moved to Missouri to pursue a job in equine reproduction. She returned to Fargo in September 2010, and joined the Valley Veterinary team shortly after. Haylee has two adorable, spoiled little chihuahuas named Daisy and Sophie. Outside of work Haylee enjoys traveling with her wife and spending time with family. 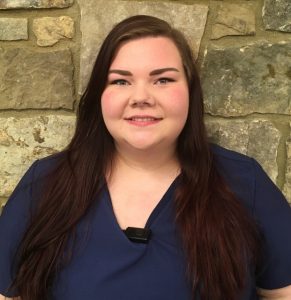 Jaime grew up in Centerville, MN and moved to Moorhead, MN in the fall of 2012. She is attending MSUM studying Evolutionary and Ecological Biology/Pre-vet and is the president of the Wildlife Society on campus. When not working or in school, Jaime enjoys reading, hunting and fishing, being with friends and family, listening to a variety of music, and spending time with her newly adopted 2 and 1/2-year-old domestic long hair feline friend, Ingrid. 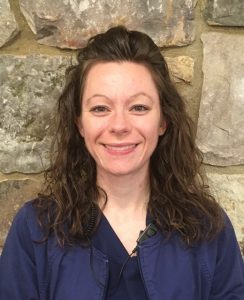 Caitlin was born just outside of Fargo, ND. She earned her veterinary technology degree from Ridgewater College in 2012 and has been part of the Valley Veterinary team since 2013. She enjoys the many roles a technician plays throughout the day at the clinic and is most intrigued by animal behavior and training. She lives just outside of Fargo with her husband and their 2 dogs; a lab mix named Ruby and a beagle named Frankie. She enjoys traveling, fishing, hiking, kayaking, camping, bow hunting, woodworking and teaching Frankie useless but fun tricks. 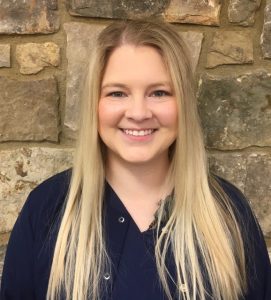 Lauren grew up and lives in Fargo, ND. She graduated from NDSU with a Bachelor of Science in Veterinary Technology in May 2016. Lauren joined our team in September 2017. Lauren loves learning new things about her job everyday. She has 3 cats; Dallas, Nibble & Luna. She has a crazy Border Collie named Harley. Lauren enjoys outdoor activities, going to the lake whenever possible & anything to do with animals. 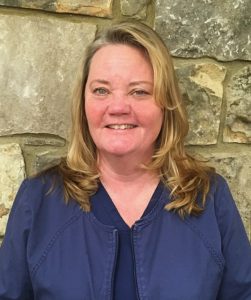 Vickie joined the team at Valley Veterinary Hospital in November of 2018. She comes with 35 + years of experience. She is married to Darren and has one 26-year-old son, Devin. Vickie and Darren live on a farm in Twin Valley, MN with currently 1 dog, 2 cats, and 5 horses but these numbers are subject to change at any time! When Vickie is not working or taking care of her own animals she enjoys being outdoors, riding horse, camping, gardening, canning, quilting, crocheting, reading and spending time with family. 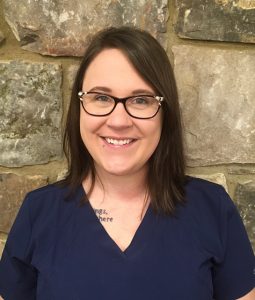 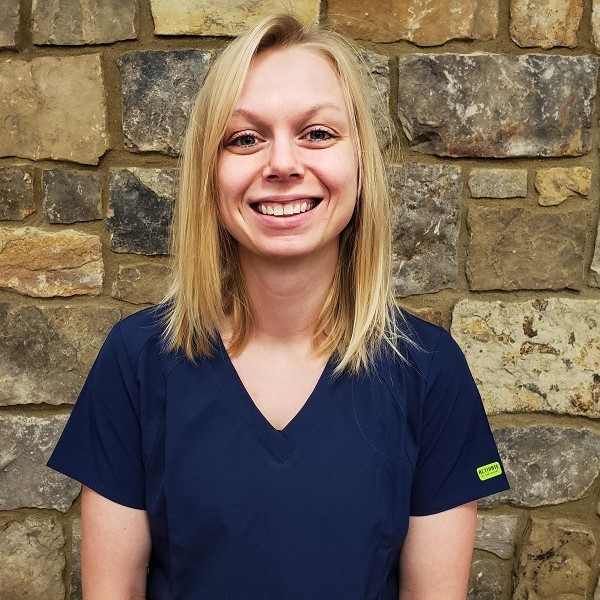 Jenni is originally from the midwest, but has lived on the west coast and in Africa. She graduated from NDSU with a Bachelor of Science Degree in Veterinary Technology in May 2020 and joined the Valley Veterinary family in August 2020. Jenni loves interacting with clients and patients. In her free time she enjoys spending time with her partner, playing roller derby, longboarding, snowboarding, camping, hiking, and mountain biking. 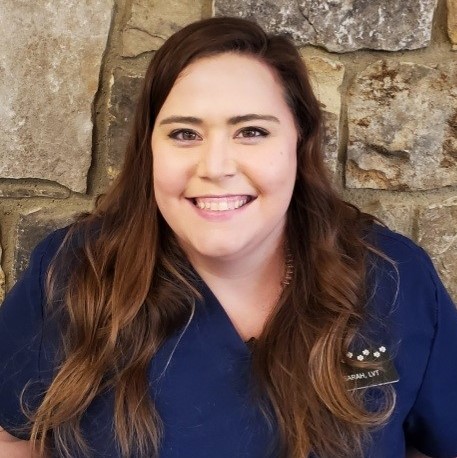 Sarah grew up in Williams county ND. She earned her Bachelor’s degree in Veterinary Technology at North Dakota State University in May of 2020. Sarah joined the Valley Vet team November 2020. She is a bunny mom to an extremely spoiled mini lop rabbit named Lily and regularly takes care of the family dog, a golden doodle named Aria. In her free time Sarah enjoys roller skating/derby, and playing video games. 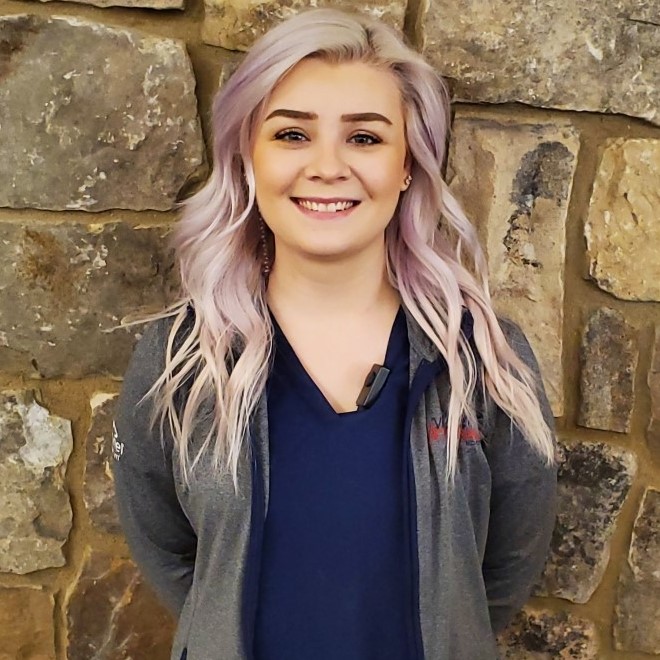 McKayla was born and raised in Bemidji, MN but moved to Fargo 2 years ago. She joined the Valley Team in June of 2020. McKayla has an 8-year-old Chihuahua, Tucker, A 2-year-old domestic short hair, TaterTot and just recently adopted a 1-year-old Chihuahua/Cairn Terrier mix, Teddi. She enjoys being with her friends and family and going on walks or snuggling up with her fur babies. 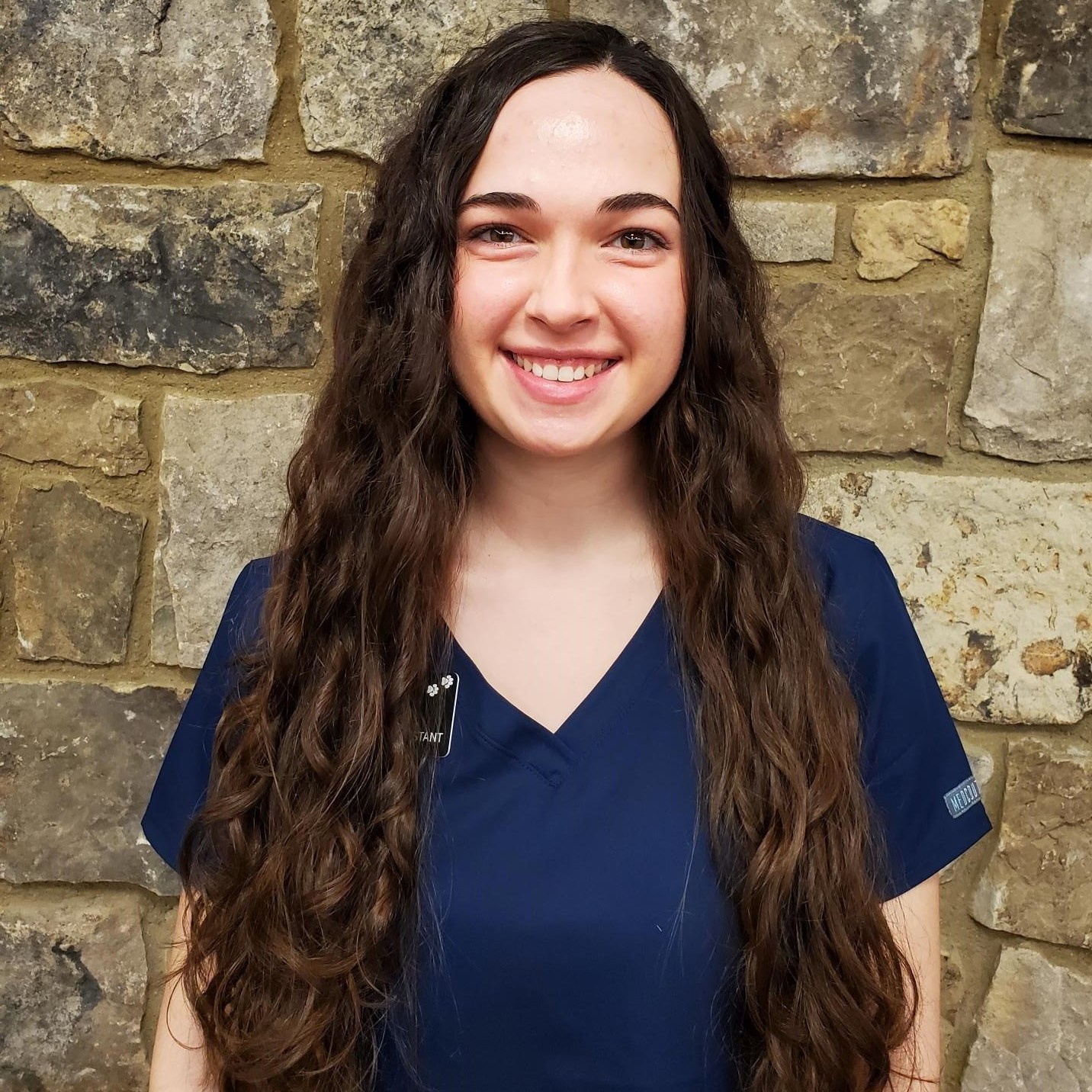 Mady grew up on a farm outside of Wahpeton, ND. She graduated from NDSU with a Bachelor of Science Degree in Microbiology in December 2020. She joined the Valley Veterinary team in February 2021 and plans on going to vet school in the future. In her free time, Mady enjoys watching movies, baking, going to the lake, and snowmobiling with her family. 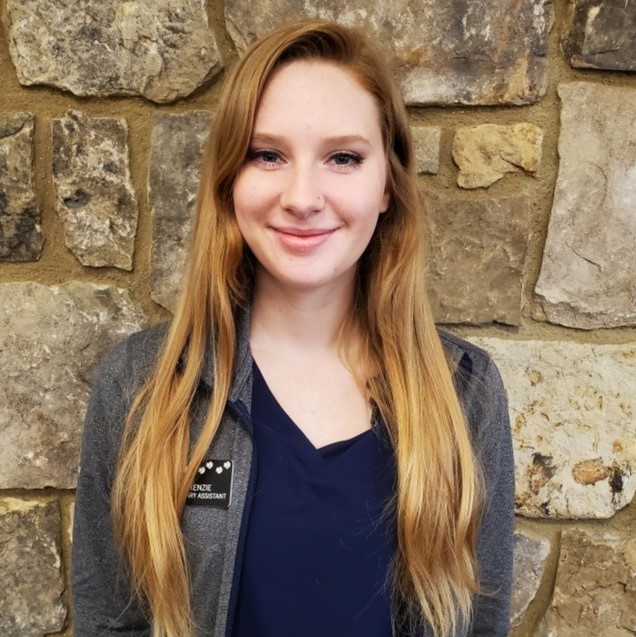 McKenzie grew up in Waseca, Minnesota before moving to Fargo in 2018 and joining the Valley Vet team in October 2020. She enjoys fostering animals, reading, and jamming to music in her car while on the way to work. She has two sassy cats named Stevie and Finley. 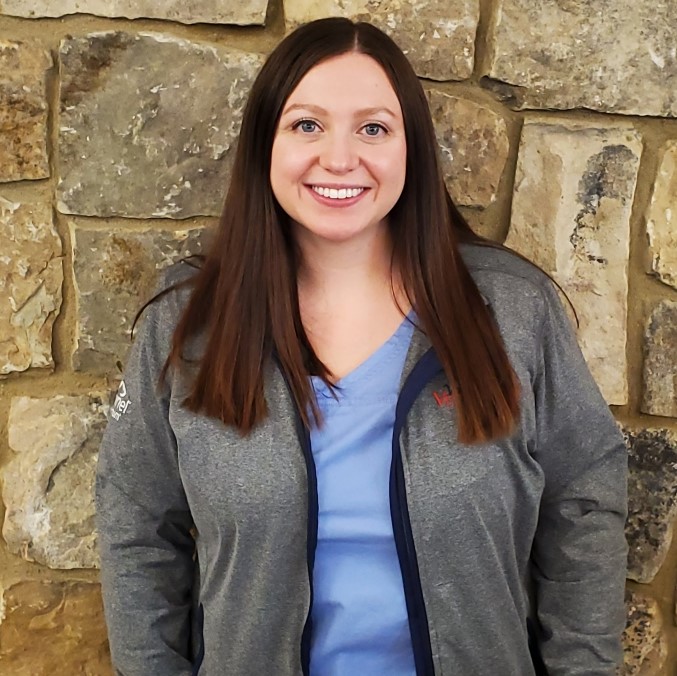 Kassie was born and raised in Fargo, ND. She joined the Valley Veterinary team in May of 2020. She has two cats, Layla and Loki, as well as a German Shephard, Mason. In her free time, she enjoys any outdoor activities, spending time with family and friends, and traveling whenever possible. 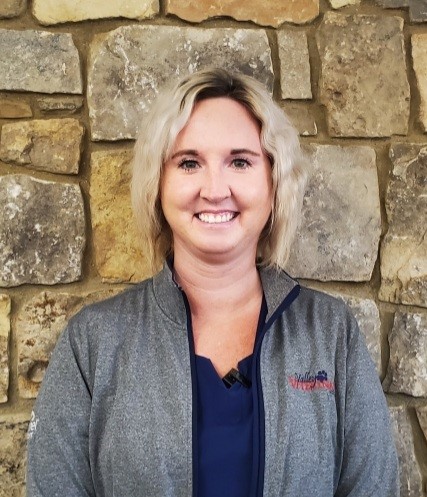 Brittany was born and raised in Fargo, ND. She joined the Valley Veterinary team in September of 2020. She loves meeting and visiting with all of the new and returning animals that come through the door every day. Brittany has two very spoiled dogs, Charlie, a Pug mix, and Chester, a Pug who really keep her on her toes. She enjoys spending time her family, especially at their family lake home, traveling and being outdoors. 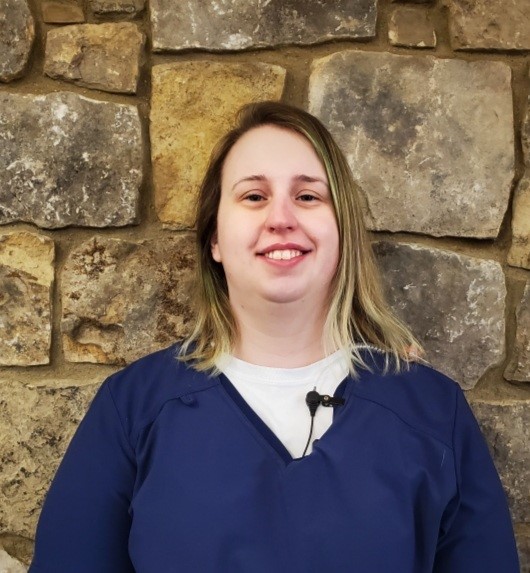 Nicole is from Fargo, ND and attended NDSU and graduated with a B.S. degree in Veterinary Technology back in 2013. She has several exotic pets at home, Renenutet the Bull Snake, Ouroboros the Piebald Ball Python, Fire & Butterscotch the Corn Snakes along with Shiva, Brahma and Vishnu the Leopard Geckos and Pluto and Proserpina the parakeets. When not at work she enjoys hanging out with her animals as well as reading and playing video games.

Font Resize
Contrast
Accessibility by WAH
Call Us Text Us